If you’ve ever taken a training course for the AWS Certified Solutions Architect you’ve likely had it drilled into your mind that security groups are “stateful”. What does that mean exactly? It means that, for example, if an EC2 instance makes an outbound request to a web server the response traffic is allowed back through the security group regardless of the configuration of the inbound rules. Similarly, if your EC2 instance receives inbound traffic it is allowed to respond regardless of the outbound rules. This capability is enabled by connection tracking.

So far that sounds pretty reasonable, but in this post I’d like to describe a methodology for penetration testers, red teamers, and cloud malware (is that a thing yet?) to persist connections on a host, even when a more restrictive security group is put in place as a result of incident response.

Lets take a real world scenario. You, as a bad actor, gain code execution on an EC2 instance in FriendCo’s VPC. You poke around a bit over a basic reverse shell. Maybe steal some credentials, escalate privileges, exfil data, etc. Eventually you trigger some kind of alert. Defenders (either automated or human) are on their way to ruin your fun. If they are following the AWS whitepaper on incident response, they will likely change the security group on the EC2 instance to one that doesn’t allow any inbound or outbound traffic. This process is typically automated using something like a CloudWatch Event Rule to automatically box you in. From here the defender can clone the EBS volume for forensics, manually interact with the host, or perform network traffic and memory collection for analysis. The following image comes from the AWS incident response whitepaper and illustrates the scenario. 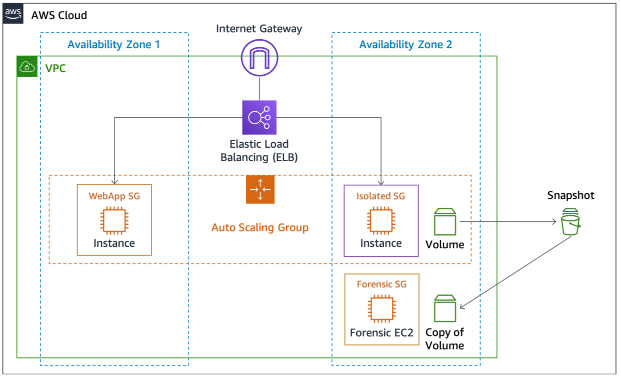 Based on that last sentence you may be confused. Let’s talk about it.

Connection tracking also applies to inbound rules as well. Taking SSH for example; if you SSH into an EC2 instance, and then change to a restrictive security group, your connection will either persist or be dropped depending on the original inbound rule.

It is due to this behavior that an existing outbound connection will be maintained, even when the security group is changed to allow nothing outbound. 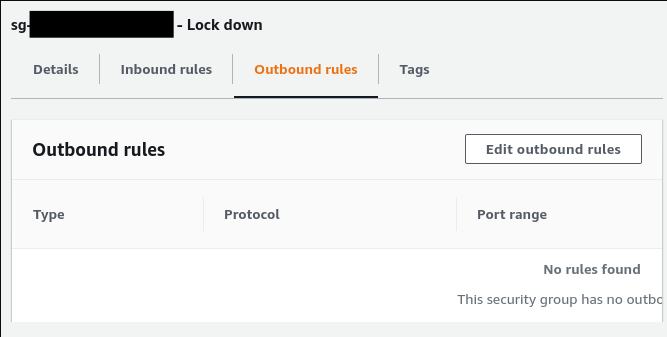 Something to keep in mind is that this is dealing with TCP connections. If you’re using a beaconing C2, your traffic won’t make it off the system and you will be locked out. While that may or may not be a deal breaker for you depending on the tooling and techniques you are employing, I do think it’s worth keeping in your tool belt. By maintaining access via this method that gives you additional opportunities to seek out privilege escalation, steal the IAM keys, or potentially engage in hijinks such as sending messages to the forensics analyst’s terminal when they log in. Or you could always just disable/uninstall the SSM agent after the priv esc. :)

How Do We Prevent This?

The short answer is that we would use NACLs as this will immediately cut the connection. There are some shortcomings with this however. The first being that NACLs operate at the subnet layer, meaning that any changes you make will effect all other EC2 instances in the subnet. If this is a business critical application it would be hard to justify setting a deny rule on all outbound traffic. You could block the attacker IP address, however you may not find this immediately, or it may require manual interaction and response which makes it hard to automate.

If you’d like to learn more about exploitation of the cloud check out Hacking the Cloud, an encyclopedia of the tactics, techniques, and procedures attackers can use in the cloud (Work in progress, please treat as such).